We offer a comprehensive range of marine mould remediation services.

Mould remediation services for all types of boats.

It’s not all fishing off the deck and drinking champagne on the bay however: owning a boat requires regular maintenance and elbow grease! As any seasoned seaman will know, boats are notorious for breeding mould – all that dampness, dim light and tightly enclosed spaces are the perfect storm for mould and mildew. Rest easy: The Mould Doctor is here to help boat owners keep their hard earned assets in excellent condition with our unique boat mould remediation services. 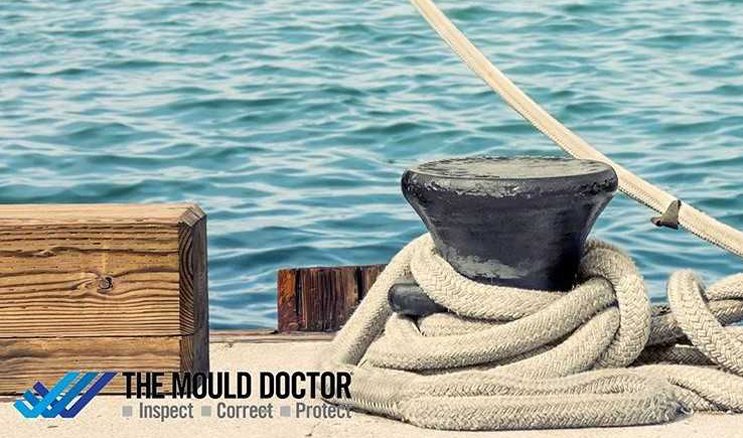 It’s an unfortunate fact: every boat – no matter how well maintained – will eventually experience mould. Often ignored, boat mould not only smells unpleasant – it can have a deleterious effect on your health in addition to degrading the finish of your precious asset. Boat ‘sweat’ is actually condensation: the result of warm air coming into contact with cold surfaces which eventually causes a mould – and a headache for boat owners without the skill to adequately address mould in their vessels.

Mould and Your Health

Mould isn’t the best guest to have aboard your vessel: mould spores and toxins are associated with asthma attacks and allergic reactions – particularly in the most vulnerable which is the young and old. Some mould spores are particularly toxic, and others have been known to cause lung infections. In short, addressing mould in your boat when they arise is a matter of health to you, your family and friends – not something to take lightly or ignore.

Noticed a creeping dark blotch on your maps or charts? Spreading marks of an unsavoury nature under bunk cushions or on the bulkhead? The time to take action is now: do not ignore mould in your boat as it will continue to thrive if left untreated. Boats offer a perfect environment for mould of all kinds to thrive: mould lives on the vegetable fibres found in cordage and clothing, paper, leather and adhesives of animal or vegetable origin. Mould particularly loves the linseed oil found in oil-based paints which are common on and in many boats.

Dampness is essential to mildew creation – so take care with the stowing of your wet gear. Anchor lines and foul weather jackets need to be thoroughly air dried, and never simply left to grow mildew inside your vessel – no matter how tired you are after your ocean journey. Make sure not to place wet materials on cockpit cushions or soft furnishings inside your boat: this is a recipe for returning weeks later to find an unpleasant mould throughout your vessel.

Mould thrives during the damp seasons of autumn, winter and spring, encouraged by weather when the sun is still warm, but the air is cool. Airborne mould spores attach to the condensation caused by these environmental conditions, before manifesting into visible mould.

Our trained mould remediation technicians know how to support boat owners in their management of mould. The Mould Doctor provides a non-toxic mould removal service which is safe for the boat owner, their guests and the environment. After removal of your boat’s visible mould, we then undertake decontamination fogging which eliminates mould spores, bacteria and odours.  You may even choose to engage The Mould Doctor on a ‘one off’ or quarterly maintenance program. We’re here to make sure you enjoy the rewards of boat ownership and good health year-on-year!